The Darjeeling toy train, or Darjeeling Himalayan Railway, takes travelers across the Eastern Himalayas’ lower levels to Darjeeling’s undulating hills and rich green tea gardens. Like the majority of hill towns in India, Darjeeling served as the British’s summer hideaway. The railway was finished in 1881, and in 1999 it was added to the UNESCO World Heritage List. Today, some of India’s only remaining historic steam locomotives travel along it.

Why you must take the Darjeeling toy train ride?

The toy train of Darjeeling is one of the most iconic heritages of West Bengal. Apart from providing you with a view of amazing scenic landscapes, it will take you through some of the unique sights that are must-visits for everyone.

Known as the highest altitude railway station, Ghoom is a famous tourist spot. The place offers a breathtaking view of the majestic snow-clad Himalayan mountains.  If you want to spend a few hours among the clouds with a serene ambiance, Ghoom is your perfect choice.

Batasia Loop plays an important destination along the Darjeeling Himalayan Railway track. One of the greatest engineering marvels, the loop was built to counter a steep gradient of 148ft. From Ghoom station, when the toy train starts the downhill journey, it encounters this sharp descent. At Batasia Loop, the toy train takes a 360-degree turn and crosses its track before entering a tunnel.

Batasia Loop is a loved destination by travelers because of its beauty and serenity. You can witness a spectacular view of the Kanchenjunga on one side along with the antique Darjeeling town on the other. It is surely a great place to spend a few days on vacation away from the cacophony of city life. Anutri Hill Resort, located in Upper Batasia, is a perfect choice as it provides world-class accommodation with a wide range of cuisine and panoramic views from the rooms.

How to take the Darjeeling toy train ride?

The price of the toy train ride is as follows

Apart from the toy train, there are Passenger Trains and Safari Trains. The passenger trains are diesel locomotives that run from New Jalpaiguri to Darjeeling. It generally consists of a first-class coach, one AC Chair coach, and one coach for luggage.  The safari train runs from Siliguri to Rangton, and consists of both diesel and steam engine locomotives. It is a special attraction because it provides a picturesque view on the way. It passes through the lush green Mahananda Wildlife Sanctuary. The trains run twice daily.

The Darjeeling toy train ride has been awarded UNESCO World Heritage Site and has always remained very close to the heart of all Indians. As is the case with many things in Darjeeling, the toy train also has a colonial nostalgia imbibed with it since it was first built by the British. To add a modern flavor to this historical toy train ride, new vista dome coaches were added in 2021.

If you are looking for the best honeymoon suites at a modest price then Anutri Hill Resort will make your honeymoon a memorable one. 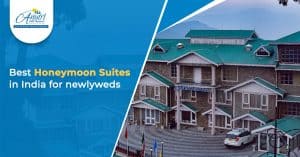 Here is a list of the best honeymoon suites in India for newlyweds. Enjoy your honeymoon with your partner at the resort with top modern amenities. 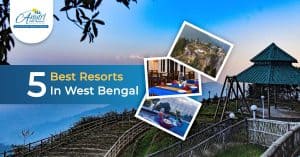